One of the most popular attractions in Viet Nam, Ha Long Bay, is a UNESCO World Heritage Site with over 1,600 islands and islets spread over 43,400 hectares, forming a spectacular seascape that attracted 14 million visitors in 2019.

According to Vietnamese legend, dragons descended from heaven to defend the Viet people from invaders, spraying fire, emeralds, and jade, which later became the dramatic limestone pillars for which Ha Long Bay is famous.

Although only 40 of these islands are inhabited, nearly 500,000 people live in the three districts around Ha Long Bay.

This means the area is greatly affected by land-based pollution, with over 28,000 tonnes of plastic waste generated in the area every year, of which more than 5,000 tonnes end up in the ocean.

Despite being directly dependent on the health of Ha Long Bay’s rich ecosystem and biodiversity, the local tourism and fishing industries are also major sources of pollution.

To address this problem, the Global Environment Facility’s Small Grants Programme (SGP), which is implemented by the United Nations Development Programme (UNDP), has been supporting the Farmers’ Association of Quang Ninh province to mobilize coastal communities around Ha Long Bay to increase the rate of solid waste collection and treatment, while reducing the amount of plastic waste generated by local households.

With funding from the Norwegian Agency for Development Cooperation (Norad) and the Quang Ninh Provincial People’s Committee, the project’s focus is on developing a community-based model for integrated domestic waste management.

Married with two children, Đinh Thị Luyến joined the project at its inception, and is now a key participant that inspires her community to engage in this initiative.

The project includes activities to raise awareness and build the capacity of local communities, government officials, and civil society to address the plastic crisis, as well as financial and technical support to waste pickers, most of whom are women.

The project developed various effective models for waste separation at the source in households, fishing boats, and tourist boats, as well as models for waste pickers’ groups, composting, and recycling.

According to Nguyen, this has created jobs and increased the income of local women, in addition to promoting the connection of women and fisher groups who support each other and take care of poor households in their communities.

From waste pickers to environmental communicators

The project in Ha Long Bay was inspired by a previous initiative in the ancient Vietnamese town of Hoi An , where SGP supported the Hoi An Women’s Union to develop a long-term waste management plan, while creating jobs for vulnerable women.

The impressive role of these women as informal waste workers and the project’s innovative way of collaborating closely with the informal sector makes this a shining example of the integrated approach to waste management.

Because the informal sector is Viet Nam’s largest contributor towards the recycling and reuse of waste, the project worked to meaningfully engage these informal waste workers and recognize them as key players, communicator, and agents of change.

By forming their own network in Hoi An, these women highlighted how the informal sector is an active, yet under-utilised and often misunderstood part of the waste value chain.

Recognising this, and that Viet Nam needs innovative ways to tackle waste pollution, the projects in Hoi An and in Ha Long Bay have sought to actively engage all actors from both the formal and informal sectors.

Mobilizing wider society from women’s unions, state agencies, communities, the private sector, and waste pickers, these projects are working toward a single aim: to reduce, reuse, and recycle waste and biodegradable refuse.

The work in Ha Long Bay is part of a broader initiative supported by the Government of Norway through Norad that is replicating and scaling up Hoi An’s successful model in five other cities. The work is boosting waste segregation, collection, recycling, and composting, and by collaborating with businesses to introduce the circular economy approach and foster investments for green technologies. 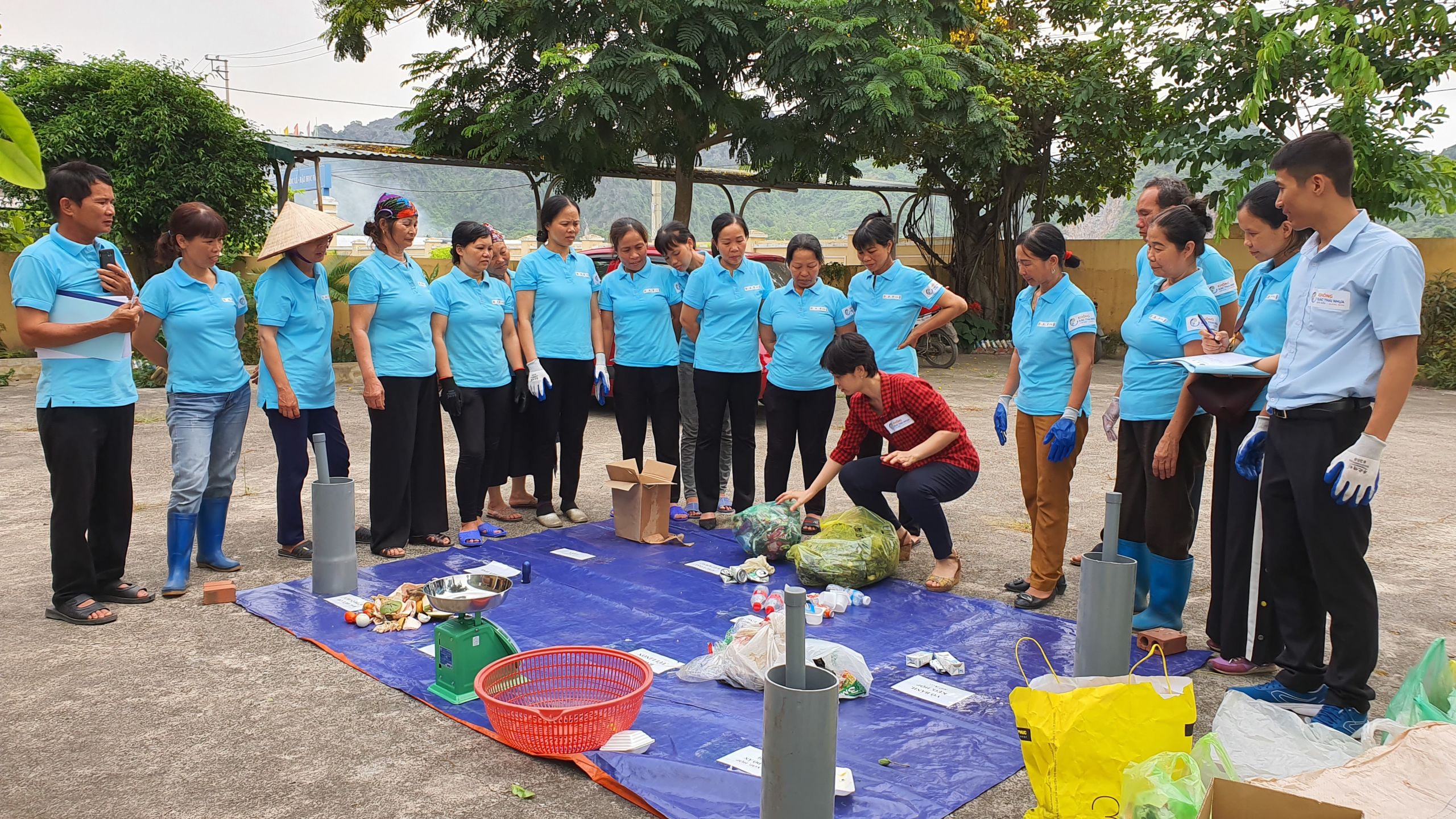 UNDP has also been working closely with local authorities to formulate and implement waste regulations, specifically by introducing the circular economy approach into legislation that will implement Viet Nam’s new Law on Environmental Protection.

In response to the plastic crisis and its alarming impacts on the planet and society, in alignment and in close coordination with the wider UNDP’s Plastic Offer, SGP is launching a new global innovation programme to reduce plastic use and waste, boosting innovation for sustainable product design and ecological alternatives, support circular solutions, and improve waste management.

SGP’s Plastic Innovation Programme will pilot and scale up innovative ideas and technologies with partners, inspired by successful experiences at the country level (including those in Viet Nam).

To jump-start the programme, 68 country initiatives will invest a total of USD$3.2 million from their core funding to support innovation in plastic management. An additional USD$2 million from global funding will be allocated to 10 country programmes for the scaling up of innovative solutions.

SGP provides financial and technical support to civil society and community-driven initiatives that address global environmental issues while improving local livelihoods. Since 1999, it has supported more than 220 projects in Viet Nam in the areas of biodiversity, climate change, land degradation, chemicals and waste, and international waters.

This story was first published by UNDP/GEF Small Grant Programmes.