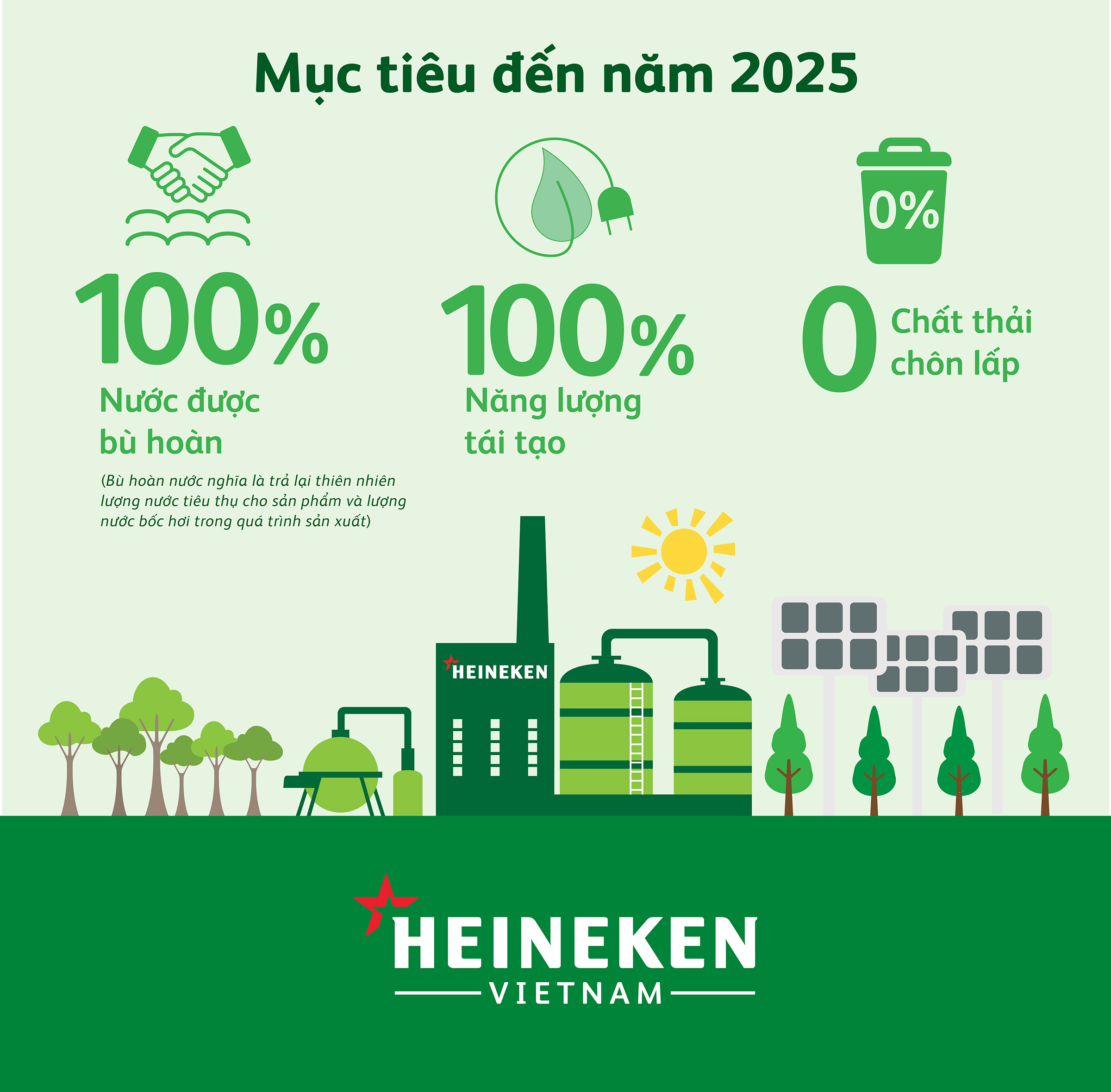 Owning 26 factories stretching from North to South, contributing to nearly 1% of GDP per year, Heineken is one of the largest foreign-invested enterprises operating in Vietnam.
During the operation process, besides the profit goal, sustainable development has always been the focus of Heineken’s top priority, reflected in the annual sustainability report. Heineken is also an enterprise that has maintained the top 3 position of sustainable development enterprises in Vietnam for many years, according to the Vietnam Chamber of Commerce and Industry (VCCI).
Ms. Nguyen Hien Linh, sustainability executive at Heineken Vietnam, said that Heineken’s sustainable development strategy focuses on three aspects, including prosperity, people and planet. Implementing that sustainable development strategy cannot be without the contribution from the circular economy model.
Circular economy and the “win-win” model
The current economy is being operated based on a linear model, with the feature that the product life cycle is represented in a straight line, from the process of exploitation, production, consumption to disposal.
According to Ms. Linh, at each stage of the linear model, we can make changes towards the transition to a circular economy model, such as using secondary materials at the extraction stage or designing products that are easy to collect, sort and recycle.
Applying that thinking, Heineken has gradually transformed its operations towards a circular orientation. Up to now, Ms. Linh said, the circular economy is present in Heineken from production at the factory to operating in the office. The spirit of circulation is also spread by Heineken to the company’s suppliers and distributors.
Specifically, at the factory, beer residues after the production process are used to make animal feed. Wastewater is also thoroughly treated, which can be used to water plants or raise fish.
For the energy used in the plant, Heineken established a third unit to acquire rice husks, sawdust, and process it to create biomass fuel.
For all kinds of packaging such as cans, bottles, bottle caps, beer kegs, Heineken collects directly at shops and supermarkets to recycle and reuse. Particularly, bottle caps are collected and processed into steel by the company to build bridges in difficult localities such as Tien Giang and An Giang.
Heineken’s RESOLVE Circular Economy Model

At the offices, Heineken’s staffs are also fully aware of the mindset of reducing waste and actively recycling through internal programs such as a contest to decorate a pine tree from recycled materials or a program to decorate a tree with recycled materials. The process of exchanging, buying and selling used goods to collect money for charity.
At events organized by Heineken, attendees are encouraged to use personal water bottles as an alternative to disposable plastic cups. Products used for events such as hats and shirts are wrapped in eco-friendly recycled paper packages instead of plastic bags and plastic bags.
Ms. Linh said that Heineken’s programs and activities towards the circular economy model all create “win-win” benefits, both protecting the environment, and helping to reduce production costs. effective communication, while also contributing to serve and increase the livelihoods of the community.
According to the plan, by 2025, Heineken Vietnam will proceed to compensate 100% of water used in the production process, use 100% renewable energy and 100% of waste is recycled, reused or properly treated instead of burying and disposing of it into the environment.
“The goals set by Heineken Vietnam are even more ambitious than those of the parent corporation,” emphasized Ms. Linh. The CIRAC system turns aluminum laminated thermoplastic, focusing on snack and food packaging, into valuable products and materials, such as aluminum, diesel fuel and activated carbon.